12WBT fitness guru and Lean & Strong leader Louise McDonald shares her inspirational story of friendship, determination, and the power of mindset. Read on!

A Friend in Need

In December 2013, I donated a kidney to my best friend Peter and what this has done for MY life is nothing short of a miracle. Peter was a World Champion 100m Sprinter and held the title for this event in 2002. During our training for the 2003 Championships, he became quite distressed and frustrated due to his decreasing performance during our sessions. He was very shortly afterwards diagnosed with cancer and my whole world fell apart.

After over a decade of one medical dilemma after another, he had renal failure. We almost lost him and then were told that he needed a new kidney to survive. So that’s where it began, I gave him one of mine and here’s how I got through this…

Initially I needed complete bed rest and was advised to not lift weights for a minimum of four months, so I listened attentively and followed instructions by my medical team.

After the first two weeks I felt well enough to walk and I began to move slowly into steady daily walks with my friends, which I believe plays a huge role in the recovery process, not only from the perspective of the physical, but for how amazing this is in encouraging endorphins back in with some movement.

I felt well enough after a few months of walking had passed, to then attempt my first resistance workout and boy oh boy I felt like I had lost all of my strength, all of my muscles AND my mojo had gone! It crushed me to think that only a few months previously, I had been the picture of health and beasting out epic sessions!

The Importance of Mindset

Now this is where I feel it’s important to recognise the stage of reduced mental and physical strength. This is the point that I feel many people give up and I realised in that exact moment how lots of my client’s feel/have felt and how scary this can seem. I decided to take back my power, to look forward and be grateful for the ability to exercise, to have control over how I did this and what I ate.

Yes, it was hard when I looked down at my tummy to see the wound and what this meant for me now, not being able to perform as I used to and how this dented my confidence initially. I worked my way through my program, using the tools to accommodate my recovery. There is no cookie cutter approach here as everyone is built differently and heals uniquely.

Ten months have passed and I’m feeling pretty good, I’m back on the 12WBT Team as Captain Lou of the Lean and Strong Pirates and my sense of self-worth and achievement has rocketed!

That was until I was rushed into hospital one afternoon with a severe case of adhesions (scar tissue) that had formed following my first procedure to remove my kidney, and I needed a major operation to save my life.

This was indeed a very funky experience for me and I remember thinking “I can’t do this anymore and I’m never going to get there again” as I worked through this recovery process.

I was back to square one again, actually no… waaaaay further back as now I had the added complications of dealing with a second unplanned surgery to heal from. Again, I began slowly with walks, I was really great with my food and applied a sensible approach to my food groups to provide great nutrition, knowing that this would have me back in the game quicker.

I refrained from any weight bearing exercises for around four months again, and while I became a professional walker, I took the opportunity to have fun with this by catching up with clients and friends for a buddy system.

Sunday mornings were SPECTACULAR! I would arrange to meet my star client of the week (depending on their availability) and we would walk from Bondi to Bronte and back, with a delicious breakfast on me at the end to show my thanks for their hard work and support in my own venture.

We carried water bottles in each hand and once we reached Bronte Beach, we would stand at the end of the sand and repeat the mantra for the week, while doing little bicep curls, tricep extensions and lat raises, etc. The bottles were so light, but doing lots of reps while singing out of tune was brilliant fun!

Getting Back to 12WBT

When I did start back up as a Lean and Stronger, I did what I could SAFELY, I listened to my body and if I needed to make a change to any exercise, I just chose something that felt good and kept it simple. Movement is progress and consistency is a great result! I had the perfect excuse to give in on exercise and fall into victim mode after my experience, but I couldn’t let that happen, I value my health and respect my body too much.

I was told I would never squat again and now, almost two years on, I SQUAT, I perform aerial dance amongst many other things I had NEVER done before.

My fall to rock bottom in physical attributes was my greatest treasure and my message to you all is, NEVER give up, NEVER lose sight of being everything that you dreamed of and the sky is the limit! You’re unique and amazing in your own way, so when the chips are down, take a moment to reflect on how you can make this the biggest learning curve of your life, and trust that once you’ve nailed it, you’re invincible. 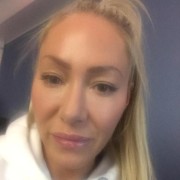 Louise McDonald, Cert III & Cert IV Fitness
Louise has been a Trainer and Wellness Coach for almost 20 years and is one of our experienced Support Crew members in Fitness, as our Lean and Strong Captain! Louise has worked passionately with all levels of fitness over the years across both Australia and the UK, where she has specialised in competition training with athletes for the last decade. She has worked closely with top level competitors and even our own 12WBT peeps to bring home a National Trophy! She lives, breathes, eats and sleeps weight training and is super passionate about teaching others how to reach their full potential.

5 Things To Do When You’re Feeling Overwhelmed

How Mindset Affects Your Weight Loss And Fitness

How To Set Up Healthy Habits That Will Actually Stick

Are you looking to start 2022 with healthy habits that will actually STICK ...

Your MB Active Mothers Day Gift Guide for Every Budget